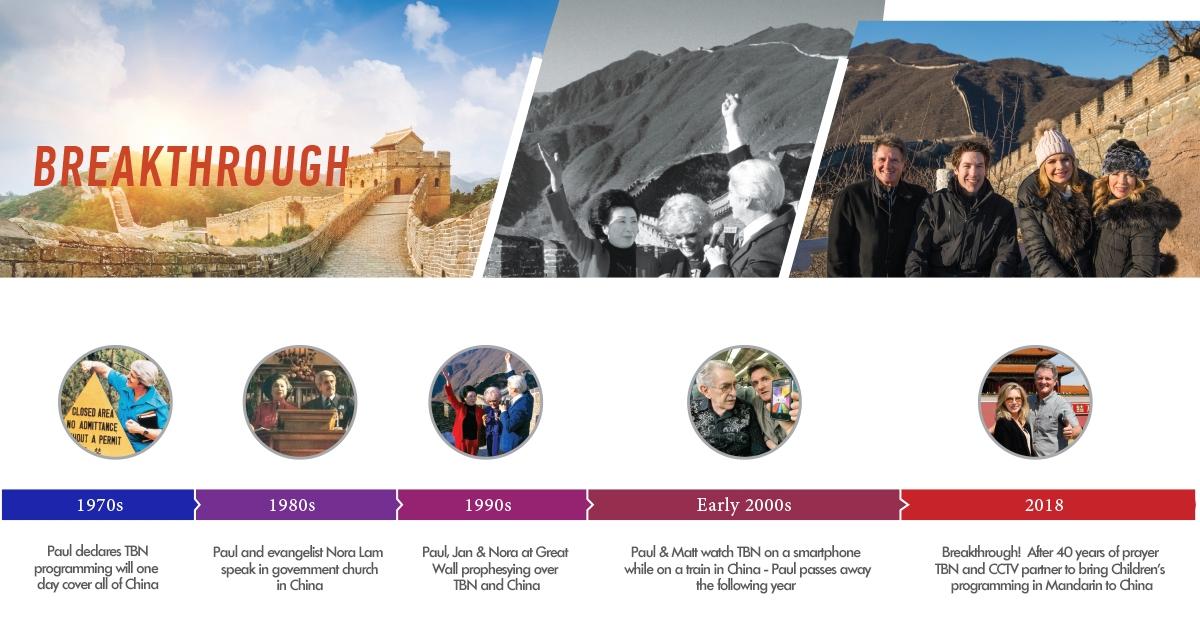 After 40 Years of Prayer

It was way back in the 1970s that TBN founders Paul and Jan Crouch first set their sights and their faith on broadcasting in China. In those days, China was very much a closed, mysterious nation.

To natural eyes, the thought of bringing Christian programming to mainland China was an impossible fantasy. In reality, it was a God-given dream.

In the years that followed, Paul and Jan made numerous trips to China and spoke with leaders there about Christian television on each occasion. They plowed the hard ground and sowed the first seeds. They, along with many of TBN’s partners, watered those seeds with prayer for decades.  As the timeline on these pages reveal, in recent years TBN has begun to see the first signs of green shoots rising up from the soil.

In fact, not long ago, a prominent Chinese television producer arranged for Matt and Laurie to meet in Beijing with executives of China Central Television (CCTV)—the largest television group in that nation of more than 1.4 billion souls—to discuss the possibility of TBN providing large blocks of program content for one of their channels. CCTV is accessible to more than a billion people.

We are thrilled to report that TBN’s programming partnership with CCTV can become a reality. After 40 years of prayer, we are seeing the fulfillment of this dream! With your support and prayer, we will begin by providing a block of children’s programming in the Mandarin language.

Please take a moment to reflect on this: YOU are about to be a part of bringing illuminating children’s programming to millions upon millions of children in China. The door is open. Let’s walk through it together.