TBN's Italian network is expanding its reach to literally every home across the nation.

TBN’s Italian network is expanding its reach to literally every home across the nation.

Italian network, Televisione Cristiana in Italia (TCI), one of the crown jewel’s of TBN’s international outreach! TCI has been broadcasting the love of Jesus in Italy since 1985, when TBN founder Paul Crouch bought a single station in Campione d’Italia, a small piece of Italian land surrounded by Switzerland. That channel began immediately to broadcast life-changing Christian programing dubbed into Italian throughout northern Italy. A few weeks later TBN added a second Italian station located on Mount Orso, that reached south toward Milan. With the addition of a third channel in the summer of 1985 more than seven million Italian individuals and families were beginning to receive the good news of Jesus through television — a true miracle of God’s grace in this nation that helped birth the Christian faith. 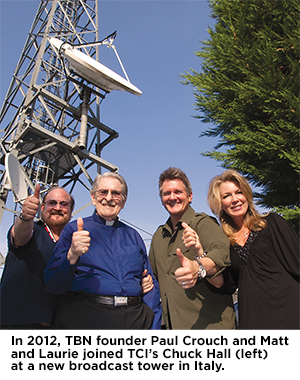 Today TCI reaches a potential of nearly 15 million Italian viewers with both regional and international Christian programming. But recently Matt Crouch announced that TBN has acquired a national broadcast license and carrier arrangement that will expand TCI’s reach to nearly every home throughout Italy, giving 96 percent of the more than 60 million residents round-the-clock access to culturally relevant, life-changing Christian programming.

“We’re more than thrilled at how God is giving TBN favor among the Italian people,” said Matt. “In this land that represented the epicenter of the Christian faith beginning in the time of the apostle Paul and for centuries afterward, the message of hope and grace through Jesus is going to be available 24 hours a day to literally every Italian home and heart. We’re believing for a massive harvest of souls for Italy and beyond.”

Stay tuned for more on this developing TBN story — and experience TBN’s Italian network for yourself at tci-italia.it. https://www.tci-italia.it/