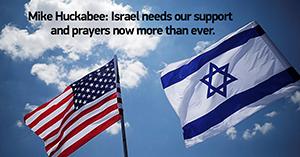 Mike Huckabee:  Israel needs our support and prayers now more than ever.

Every time I experience Israel, I feel a sense of serenity, holiness and kinship that I find nowhere else. This must be what makes me keep coming back. I have been visiting the Holy Land – the land of miracles in the Bible – for 45 years, with several trips each year.
On each trip to Israel, my relationship with the Lord grows deeper and I am privileged to share that journey with others, drawing on my roots from years ago as an evangelical pastor to ensure they too feel that joy and wonder.
But my continuing religious growth is only part of the reason I return so often to the Holy Land of the Bible. I also feel a deep sense of belonging in the country, both politically and socially. Going to Israel is a bit like going home. That’s why it is so important to continue to pray and act for Israel’s survival and serenity.
On Sept. 7 I will be joining people across the globe to pray for peace and stability in Israel and for a return to civility for all mankind.
Each year, Acheinu – the outreach arm of the nonprofit educational organization Dirshu – holds a Day of Jewish Unity. On this day, individuals – Jews and non-Jews alike – are asked to come together and promise to be kinder and more caring, while praying for peace.
Israel, the only true democracy in the Middle East, needs our support now more than ever. With rising anti-Semitism and hostilities from Israel’s Arab neighbors, our Israeli brothers and sisters need us. Supporting Israel not only helps its citizens, but helps us in America as well.
Like the United States, Israel believes in freedom, democracy and fighting terrorism in all its forms. Israel is our truest ally in the Middle East, with values more closely aligned to ours than any other Middle Eastern nation.
As a Christian, I know that Israel is sacred and is a fulfillment of prophecy in the Bible. God wants Israel to stay strong and grow. We need an Israel free from violence, with Jerusalem as its united capital.
There are too many forces in our world trying to destroy the Jewish people and the Holy Land, but Jews need to stay strong and united – and we must join them.
Acheinu promotes this day of prayer in honor of Rabbi Israel Meir Kagan, who devoted his entire life to promoting respect and civility and cautioning about the evils of gossip. Though Rabbi Kagan died in 1933, his teachings live on.
I think if Rabbi Kagan was alive today to see how divided the world still is, he would be disappointed. And yet, through the rabbi’s teachings, I also know that he would not give up hope but would continue to call for courtesy, understanding and cohesion.
As Americans, we are blessed to have the right to speak our minds and voice opposition to the government without fear of reprisal. But there is a difference between articulating your views and spreading vitriol.
We can disagree with one another, yet remain courteous. A disagreement does not have to be a fight. I think it is safe to say that Christian scholars, both present and past, and Rabbi Kagan would have agreed on this.
It has saddened me greatly to see how my own daughter, White House press secretary Sarah Huckabee Sanders, has been treated this past year by those on the other side of the political aisle and many in the media.
My daughter is a kind, caring and good-hearted wife and mother, so it pains me to see the near-constant personal attacks made against her. This is not to say you cannot disagree with her or with the White House she represents, but the key to civil discourse is civility.
As Americans, we do not have to always agree with one another – in fact, it is our disagreements that often heighten our dialogue and ideas.
But, as Americans, we must remember that we are “one nation, under God.” Just as the Jewish people, though divided into many denominations, still view themselves as one people with a common interest in supporting and protecting the Holy Land, so must we as Americans come together.
We must unite against those who would wish to destroy all that we – and our forefathers – stand for. We can disagree, but we should also be proud that together we make the strongest democracy in the world.
On Sept. 7, please join me in praying to God for peace and the continued prosperity of Israel and all mankind. And back up your prayers with your interactions with others by reminding yourself to be kind, courteous and always civil.
Original article published by Fox News
Photo: American and Israeli flags.  (REUTERS/Amir Cohen)