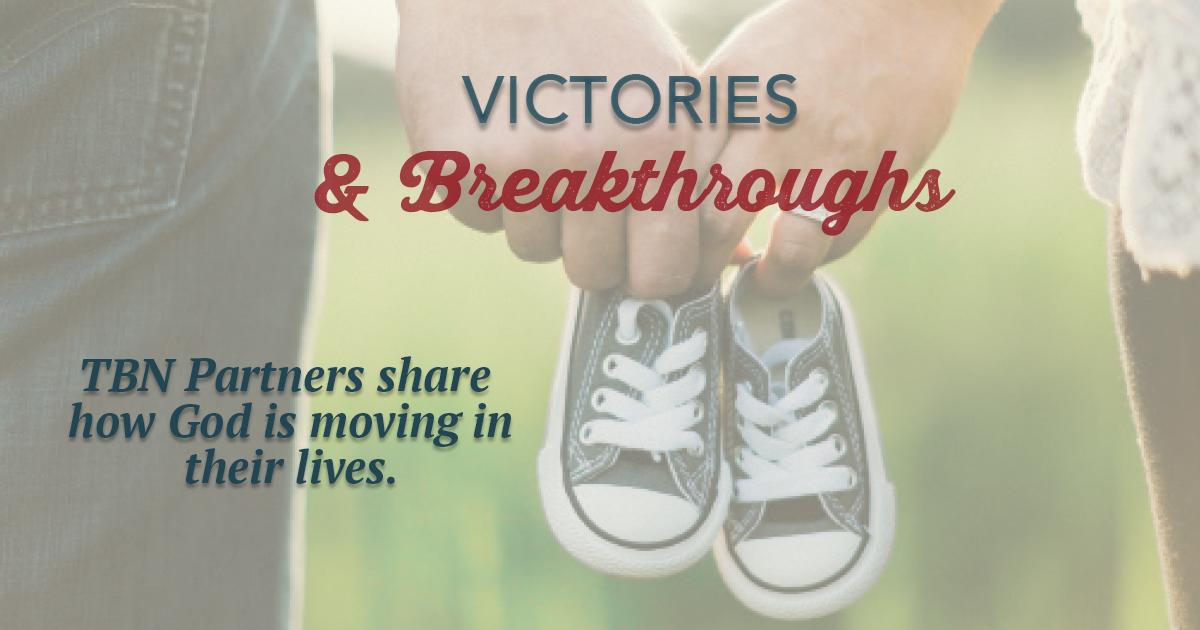 TBN Partners Share How God is Moving in Their Lives.

“Since I have been partnering with TBN, my whole life has changed. I have been free from drugs, alcohol, and nicotine. God is doing wonderful things in my life. I have been speaking over other people’s lives, and they are being delivered also.” JACQUELINE, AUGUST 2019

“So thankful for the TBN prayer partner for praying for my right eye. God healed me of the bleeding while we were praying and gave me a new blood vessel, which the ophthalmologist later showed me in the pictures at the clinic. Praise the Lord!” CAROL, SEPTEMBER 2019

“Thank you, TBN, for not forgetting about people who are in prison. I am an inmate in Arizona and have experienced so much peace and freedom, thanks to my relationship with Christ. A few of us women hold a Bible study, and we love and watch TBN. What a blessing!” CATHERINE, OCTOBER 2019

Georgio and Kristan Rodriguez were married in 2004 and got pregnant for the first time in 2007. They live in Florida.

In 2007, Kristan Rodriguez lay in a hospital intensive care unit in Florida. At 8 months pregnant, her condition had taken a turn for the worst. Her husband, Georgio, would have been at her side, except that he, too, was hospitalized. Following a business trip overseas, he had fallen ill, contracting a virulent infection.
Then, their first child was stillborn.
“Even if your faith is as strong as it can be, when you’re tested, you can have doubt that comes from the enemy,” Georgio said. “After we lost our first son, we didn’t want to be out in public. We spent a lot of time at home.”

“Many of the programs on TBN helped to rebuild our faith.”

They had always been active Believers, but the situation tested their faith. In their grief, they turned to TBN and began to watch Christian programming. “Many of the programs on TBN helped to rebuild our faith,” Georgio said.
After a second miscarriage, three doctors told Kristan she would never get pregnant again. The couple turned to foster parenting, then began the process of adoption. The Lord spoke to them at this time, revealing that when they opened their home to a child, God would bless them with a child of their own.
“When a word is spoken to you or you know God has something for you, faith and prayer get you through,” Georgio said.
Today, their second son, Royal, is 3 years old, and they have a 15-month-old, whom they adopted.
TUNE IN TO TBN for faith-filled programming that changes lives.
To share how TBN has impacted your faith, please submit your story at tbn.org/mystory.